Kicking off a week of Belmont Stakes 2012 Facts and Figures

We’re closing in on the 144th Running of The Belmont Stakes at Belmont Park on Long Island this coming Saturday, June 9th. Since the event is just days away, The Big Adventure wanted to share some noteworthy Belmont Stakes Trivia. Anything we can do to get you pumped up for the Triple Crown Bid day and to impress any friends who may be equine aficionados. Each day, we’ll count down the nine most interesting facts about the Belmont Stakes:

Fact #8 – The Largest Crowd Ever at Belmont Stakes was in 2004 when 120,000+ spectators visited the track to see Smarty Jones take a chance to become Triple Crown winner - Smarty finished 2nd. That's more people than New Yankee Stadium and Citi Field combined can hold! Belmont Park also can handle crowds larger than the Big House at University of Michigan - The largest sports stadium in America. And..yes..also larger than that Horseshoe in Columbus, OH 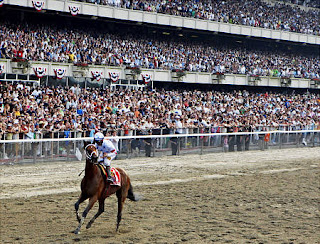 If you’re looking to plan your own Belmont Stakes Adventure this Saturday, feel free to look to our Belmont Stakes and Delicious Steaks Big Adventure from 2010 for some inspiration on some great things to do that day!

Words of Wisdom by The NYC Big Adventure Info@NYCBigAdventure.com at 2:00 PM