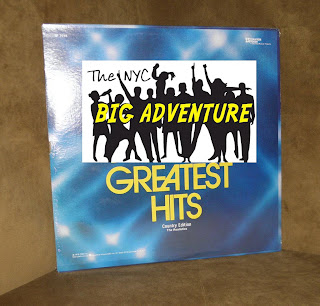 Sweet Khaki Molacki! We’re less than a week away from this Saturday’s NYC Big Adventure’s Greatest Hits this coming Saturday, June 30th!  We’ve stretched this out long enough and are now ready to do a grand reveal of the big, big, big day. Below find the entire itinerary for our day. As the purveyors of the Big Adventure, we’ve always taken pride in never repeating any stops or locations on a single adventure in over five years. This weekend, we’re flipping the script and taking a stroll down memory lane with visits to our favoritelocations. We will be spending the day exploring la crème de la crème of places in New York City that are inexpensive, social and unique to the city.

We’ll be visiting a German restaurant in the West Village, the most under-rated Museum in the city, the best Hot Dog joint in the five boroughs, one of the friendliest bars in NYC and more. We’ll also be (of course) brining back some trivia, competitive games and even some quality giveaways.

We encourage you to pass this information along to anyone who might want to enjoy our Greatest Hits track by track. As per usual, feel free to join for only part of our Big Adventure or from beginning to end for a day we promise will be unique, affordable, social, and distinctly NYC. Whether you might be attending your first or your umpteenth Big Adventure, we think you’re in for a good time! Developing info (and a chance to RSVP) always at facebook.com/TheBigAdventure

Lederhosen– 12:30 PM- 39 Grove Street  New York, NY 10014 - -(212) 206-7691- From “The International NYC Big Adventure”-  We’ll be starting the day with German Cuisine and Beer that’s a fine mixture of shtick and authenticity. You’ll be enjoying the giant Bavarian Pretzel while smirking at the giant mural that looks like it is right out of the Sound of Music.  Tons of lunch specials being offered including a Bavarian Breakfast Special that sounds nothing like breakfast.

BlindTiger – 2:00 PM- 281 Bleecker Street  - (212) 462-4682 -  From “The NYC Big Film Adventure” – We’ll saunter just a couple blocks down the street to visit one of NYC’s most beloved Brew Houses – the incomparable Blind Tiger. Friendly vibe, knowledgeable bar tenders and a beer selection that is among the best in the city.

NewYork Transit Museum–3:30 PM- 130 Livingston Street  Brooklyn-    - (718) 694-1600-  From “The 24-Hour NYC Big Adventure” $7- Per our post earlier, this is the most underrated and amazing museum in New York City. Visiting is a must for anyone who deals with the daily commute on Public Transit. The small admission fee for the largest transit museum in the world is well worth it to explore retired subway cars dating back 100 years and more – all housed in an underground, decommissioned Subway Station from 1936.

Crif Dogs – 6:00 PM -113 St. Mark’s Place (between 1st Avenue and Avenue A) - From “The Letter C NYC Big Adventure” - You may be used to having hot dogs over the campfire or at a ball game, but these are like no other hot dogs you’ve had before.  Billed as “NYC's Number 1 Weiner", Crif Dogs come wrapped in bacon, covered in avocado, or even smothered in mayo and sliced pickles. No matter what, these tasty dogs are definitely something you’ll remember from your trip to the city. Side bonus: we will stare at people as they attempt to get into somewhat secret bar PDT via a phone booth in the wall of Crif (really).

Flight 151 Bar- 7:30 PM–18th Street and 8th Avenue (Chelsea) - (212) 229-1868  -  Also From “The Film NYC Big Adventure” To revel in the glory of “Up In The Air” - -A bar with an aviation theme is perfect for people who want to go to the airport but don’t want to fly. Wha? We’ve had some memorable times in this place and they check off on all the key ingredients needed for a Big Adventure: cheap drink prices, popcorn at the bar, invitations to draw on bar napkins and, best of all, flight announcements in the bathroom. Seriously. This also is the perfect place for some notorious Big Adventure Trivia

Otto’s Shrunken Head-  11:00 PM—538 E 14th St (also between Avenues A & B) -212-228-2240- From “The Coney Island Big Adventure” A Trip back on the L train to the East Village will deliver us at Otto’s Shrunken Head.  Otto’s is a world class Tiki Bar with great, cheap drinks. We’ve set up some fantastic drink specials just for the Big Adventure. If the Photo Booth and impressively strong specialty drinks like the Volcano Blast aren’t reason enough to visit this pharmacy turned bar, the rockabilly band playing in the back will be.

The Donut Pub – Late Night- 203 W 14th St at 7th Avenue –(212) 929-0126- From “The Big Adventure OnIce” Few things are better than a late night donut that meets the pastry trifecta: freshly made, perfectly warm and smothered in the most delicious Icing this side of the North Pole. We’ll cap off our night at this small 24 hour eatery with Boston Cream, Glazed and Chocolate iced treats.

And maybe, just maybe, if there is a crew adventurous enough and awake enough, we might try to end the night with a Sunrise Ride on the Staten Island Ferry.

We hope that you’ll join us this Saturday! We’ll be Tweeting throughout the day as well. If you do plan on coming, let us know via e-mail or the Facebook Event Page  so we can plan accordingly. See you on Saturday, June 30th!