We’re closing in on the 144th Running of The Belmont Stakes at Belmont Park on Long Island this coming Saturday, June 9th. Since the event is just days away, The Big Adventure wanted to share some noteworthy Belmont Stakes Trivia. Anything we can do to get you pumped up for the Triple Crown Bid day and to impress any friends who may be equine aficionados. Each day, we’ll count down the nine most interesting facts about the Belmont Stakes:

Fact #5 – The Belmont Stakes is often called the Jewel of The Triple Crown. Why? Well, for one reason, the Belmont it is the oldest of the three Triple Crown events. The Belmont predates the Preakness by six years and the legendary Kentucky Derby by a big eight years. The first running of the Belmont Stakes was in 1867 at Jerome Park in the Bronx near Fordham University! (Go Rams). The also was inconveniently on a Thursday. Which we believe is the primary reason the event was not televised on ESPN that year. 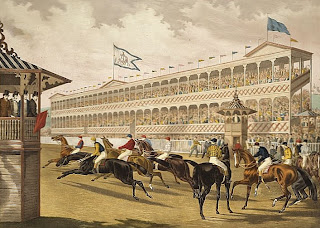 Fact #4 – By the numbers: Triple Crown Winners in 20th Century: 11. (with a BIG chance for another one this year).
Winner's Purse of the first Belmont Stakes: $1,850
Biggest Single Purse Since $1,764,800 in 1992.
Largest Margin of Victory Every: Secretariat in 1973 by a whopping 31 lengths (that is one boring race).
And the most interesting stat that could be helpful when betting: Of the 141 previous running’s of the Belmont Stakes, 60 have been won by the betting favorite (42.5 percent). A nice tip for race day...

If you’re looking to plan your own Belmont Stakes Adventure this Saturday, feel free to look to our Belmont Stakes and Delicious Steaks Big Adventure from 2010 for some inspiration on some great things to do that day!

Words of Wisdom by The NYC Big Adventure Info@NYCBigAdventure.com at 2:00 PM