The Most Unique Subway Station Entrance in NYC

In a transit system with over 468 individual subway stations, a lot of them start to look the same after a while. In New York City, there are surprisingly few stations that really stand out. A while ago, we posted on the art on the 14th street. Now, we wanted to share a subway entrance that truly knocked our socks off.

Below are three photos we took all the way uptown outside the 181th Street A line train station in the Hudson Heights section of Upper Manhattan. The entrance looks so impressively grand that it could have been lifted right out of a movie set.

Opened way back in 1932, all of the original styling seems to be in tact. Note the IRT stencil lettering on the third pictures above the wood doors. The station itself is notched deep within the station; the platform is accessible via elevators and escalators only. Which, you know, is a giant pain in the rear when the elevator and/or escalator is out.

True, there are some similar quality facades on lines in some parts of Brooklyn and such, but this one really stands out. Makes our local subway stations look like an architect's lazy Friday afternoon effort.  The 181st Street station also really ads to the low key charm of the neighborhood complete with windy, narrow streets and the highest natural peak on Manhattan Island.

The Big Adventure wants to know, what is the most colorful, unique NYC subway entrance that YOU’VE ever seen? 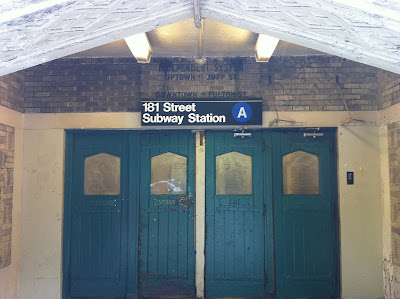 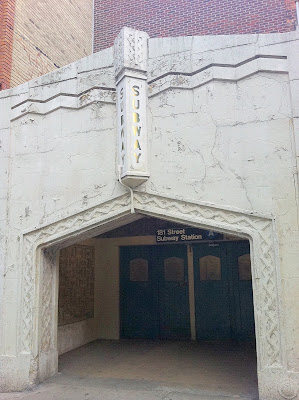 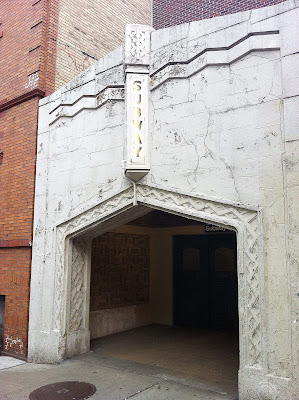 Words of Wisdom by The NYC Big Adventure Info@NYCBigAdventure.com at 6:53 PM