There are seemingly thousands of museums, galleries and the like in NYC, but some of the most interesting are the hardest to find. A solid entry in the "Lesser known yet amazing Museums of NYC" category, is The Skyscraper Museum. Near Battery Park in lower Manhattan, this small but mighty non-profit boasts fascinating exhibits series of interesting expert speakers, an ever-changing collection and a lively, excitable staff that could talk Big City Skyscrapers all day.

Billing themselves as experts in the world's first and foremost vertical metropolis, this unconventional museum operates in the shadow of some of biggest and oldest buildings in the city ever since the museum opened in the splendid new space in 2004. Founded in 1996, The Skyscraper Museum is a not-for-profit, educational corporation devoted to the study of high-rise building, past, present, and future. 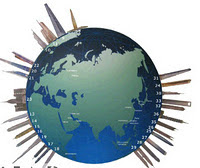 Why go now? Because the new exhibit is the perfect way to beat the cold and get into the buildings without actually getting into the buildings.The very cool exhibit SUPERTALL is worth the five bucks entrance fee alone. SUPERTALL is all about the world's tallest buildings from Asia to Dubai that have been built since 2001 or scheduled to be completed in 2016. Visit now as the exhibit closes end the end of January. On their site, they even have this thought-provoking graph showcasing where the Supertall Skyscrapers have appeared across the globe over the last generation. 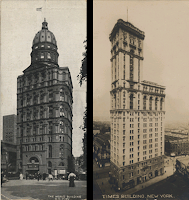 The big buildings of this town never cease to fascinate the Big Adventure and a visit provides a nice homage to all of them. Not to get overly sappy, but it is some concrete and steel poetry in the big city

Words of Wisdom by The NYC Big Adventure Info@NYCBigAdventure.com at 12:30 PM