As the New Year gets underway, we can't help but wax nostalgic on all that went down in New York City and of course the country over the course of the incredibly eventful and departed 2011. From the Nanoquake in Manhattan to the Megaquake in Japan. From Legalizing Gay Marriage in the Empire State to changes to Heads of State in North Korea (died), Egypt (ousted) and Italy (ousted..but more sexy like).

Lucky for us, the New York Times has once again combined the memories from the past year with the challenge of an online quiz. Two great tastes which taste great together. Check out the link below to re-live last year in the Big Apple and tackle some real stumpers. How many can YOU knock out?

Here are a few of our favorites from the 84+ question PDF:

(By the way, the answers are Charlie Sheen, Vegemite, Steve Jobs, Estonia and a certain Commander in Chief’s Birth Certificate) 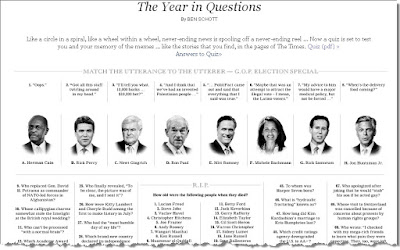 Words of Wisdom by The NYC Big Adventure Info@NYCBigAdventure.com at 11:30 AM