El Sammy Sosa Deli - Things you find in the Bronx

Recently The Big Adventure found ourselves at the intersection of 187th and 3rd avenue in the Bronx. It was here we stumbled across a local bodega with a truly head scratching name: El Sammy Sosa Deli Grocery. 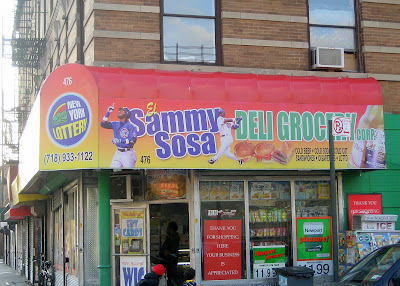 This storefront was perplexing for a number of reasons. For starters, you don’t see many NYC delis named after baseball players. Much less one who played for Chicago for most of his career. Much much less a player who is the poster child for the steroid controversy.

Second, the awning and marquee on the deli (which feature Sammy in signature swing and pointer-finger-to-God-thanking-pose) appear to be brand new. Puzzling since Sammy Sosa hasn’t hit a single home run since 2005 and hasn’t been a star player in over a decade.

Our best guess is that since the bodega is smack dab in a Dominican neighborhood, the store might be paying homage to one of MLB’s "Greatest Dominican players". However, pretty sure that Albert Pujols Deli or Jose Reyes Grocery has a better ring to it.

We didn’t actually go in and ask about the name which, a week later, is kind of driving us nuts. Right now, our biggest mystery in the Big Apple is why the owners chose the name El Sammy Sosa Deli.

Words of Wisdom by The NYC Big Adventure Info@NYCBigAdventure.com at 11:25 AM