1/9/12 Update: We've noticed a lot of interest in Sunday's event, so we have posted a link to some quality pictures of the 2012 No Pants Subway Ride from Jamie NYC over at Flickr right here

The 2012 No Pants Subway Ride in New York City. You have to smile just a touch when saying it. Ah, it is back once again. Like clockwork every first weekend of the year, those wacky folks at Improv Everywhere are hosting The 11th Annual No Pants Subway Ride in NYC this Sunday, January 8th from 3:00 PM to 5:00 PM. Groups will be gathering in in Astoria, Downtown Manhattan, Flushing, Central Park and two locations in Brooklyn.

Details were posted today right here. The premise is simple: Groups of people gather on random Subway platforms to ride the NYC Subway sans pantaloons. The participants (in theory) do not behave as if they know each other or as if anything is wrong. Aside from the lack of pants, everyone wears otherwise regular winter clothing. 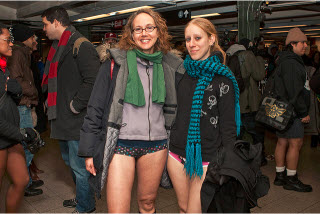 The event is completely free, you can RSVP on Facebook and they raising the ante be selling official T-shirts this year. Hey, there is even an after party at Greenwich Village Country Club starting at 5:00 PM.

Be forewarned: it is not a small, subtle event. So far, over 4,500 people have signed up on Facebook to join. That's a lot of people missing pants. Last year, we wrote about the event in much more detail. For a blast from about a year ago in the past,  we revisit our original post below…. 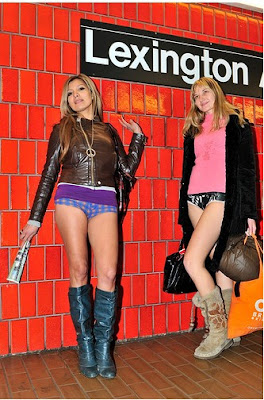 Welcome to 2011. New Year. New beginning. Same zany "take the city by storm" annual events. What does the, ahem, Naked City have lined up for January? The 10th Annual No Pants Subway Ride.

The concept is incredibly simple: Show up with no pants and ride the New York City subway system. Yes, It's sophomoric. True, its a touch ridiculous. And some would argue that it is borderline illegal and a tad lewd.


All of that aside, the event is incredibly popular and growing exponentially each year. And, yes, we have to admit that the site of thousands of people sans pantaloons tromping from Union Square to Brooklyn, across subway platforms and staircases is pretty hilarious.

Organized by Improv Everywhere, legend has it that the event began in 2002 with just seven people. When asked by curious onlookers (likely trying their best to show big city indifference) what the story is, bare-legged participants are encouraged to simply respond, "I forgot my pants today" and add lines such as "Hunh, apparently so did that random guy/gal."

Falling in the same vein as Santacon and The World's Largest Pillow Fight, this event has moved way past Flash Mob status and, for better or worse, more into citywide social event that attracts an...interesting mix of people. Also, the event has apparently spread to many a city with public transport.Sadly, many of whom attend now miss the point of the subtle prank like you're going to miss fabric on your thighs on a cold day in January.

Bottom line, if your goal is to make some new friends and walkaway with some memorable visions and good stories, this just might be the event for you. Although, where you keep your Metrocard without any pants on is your business.


And as our New Year's gift to you, here is a fantastic photo gallery from last year from one of the "agents". Gives a insider view into the day: 100110 No Pants 10 Photos 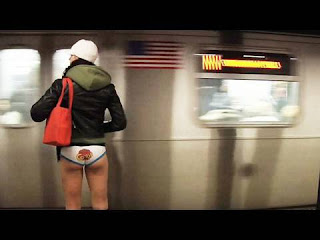 Words of Wisdom by The NYC Big Adventure Info@NYCBigAdventure.com at 8:07 PM