Not what you want to see on your subway ride

The NYC Subway tunnels are always an exciting place. There was a recent story making the rounds of the Transport Workers Union 100 hosting a “Rate My Rat Contest” (the goal was order to raise awareness on action for a Rat-Free Subway). And then this week there was just a bizarre, crazy story of an opossum hopping on an D train out at Coney Island. Crikey, I wouldn’t even know where to go to find an opossum in NYC. 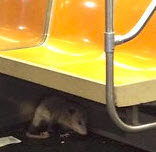 So, with the recent spate of vermin on public transit, The Big Adventure through we would resurrect this gem from last year. True, we could probably write an entire blog (and I’m sure someone has) about rats on the trains, but this is the summit of all rat-like videos.

Fair warning. Don't read any further if you really hate the site of rats. Or if you don't enjoy the idea of say...what could happen to you if you fall asleep on the New York City Subway. Or if combining both scenario A and B terrify you, just go ahead and leave now. Hands down, the most disturbing viral video you'll see all week.

Still with us? Good. Enjoy the Viral Video that captivated The Big Apple for an entire week last year: Rat Crawls On Sleeping Subway Rider's Face. (Or "A video that will deter tourists from taking public transit") - It's a short clip, but we're guessing you might shriek just watching this around :16. Talk about a worst nightmare. Geez, and I thought my general fear of being stuck on a car with a dirty rodent was bad enough.

Come to New York City! Don't fall asleep on our trains! Watch out for the animal that spread the bubonic plague and killed a third of Europe!

Words of Wisdom by The NYC Big Adventure Info@NYCBigAdventure.com at 11:05 AM