The Oscars and The Big Apple

From the incredibly cool files: right now, you can take an up-close gander at actual Academy Awards statuettes for free in the ever-versatile Vanderbilt Hall in Grand Central Terminal. It's all a part of the 100% free "Meet the Oscars, Grand Central” exhibition.

The best part: The exhibit will give fans the chance to have a picture taken holding an actual Oscar statuette! You can gaze at wonder at the actual Oscars that will be handed out to this year’s Best Actor and Best Actress. Take that, Meryl Streep! Who needs acting to get hands on the gold? 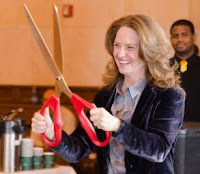 The free & open event runs from 7 a.m. to 7 p.m. and well worth the trip if you’re in the area. The event kicked off Wednesday with a ribbon cutting ceremony by Oscar Winner Melissa Leo and continues through Sunday, February 26 – The day of the 84th Academy Awards ceremony.

Speaking of the Oscars, if you’re interested in viewing the event in style in NYC, the Paley Center (formerly the Museum of Television and Radio) is hosting a “Academy Awards Viewing Party” this Sunday at 7:00 PM. NY Times chief film critic A.O. Scott and columnist David Carr will offer analysis and interact with the audience during those pesky commercials. There will an Academy Awards poll with prizes, food and drink, and all the drama on a theater-sized screen in HD. Tickets run $40. 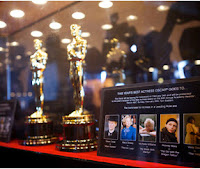 Last but not least, for the Week of Oscar in NYC there is this crazy set up in Times Square. 24 Hours a day, you can “Experience an interactive Oscar-themed sidewalk display and see what it feels like to walk the red carpet.” We think that’s a stretch...but at least it is free!

Words of Wisdom by The NYC Big Adventure Info@NYCBigAdventure.com at 4:49 PM