The New York City Department of Transportation has squashed All Atlantic Avenue Tunnel Tours. Ah, so sad. The Big Adventure wanted to mark the occasion now that one of the most unique, homegrown NYC tours has been closed.
To catch you up to speed, the Atlantic Avenue Tunnel is officially the world's oldest subway tunnel. This passageway was built way back in 1844 beneath a busy street in Brooklyn. It runs a half-mile long and accommodated two standard gauge railroad tracks. In 1861, the tunnel was sealed, closed and completely forgotten about. 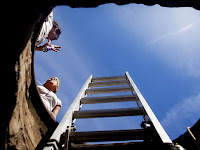 Fast forward 120 years later to when an intrepid eighteen year old explorer named Bob Diamond rediscovered the long forgotten Atlantic Avenue Tunnel in 1981. Diamond offered Grade A tours to the public for years and years. The tour was incredibly well received and led by a lively guide who doubled as a great story teller. Plus it offered the chance to crawl to unexplored dark places by sneaking down a manhole in the middle a of a busy Brooklyn avenue. The now famous tunnel is even listed on the National Register of Historic Places. In December,  Diamond even planned to lead a film screening in the tunnel!

Good times for all until mid-December 2010. Suddenly, the NYC DOT canceled their contract for use of the Atlantic Avenue Tunnel with apparently with little explanation. The NYFD stated that the tours can't continue due the risk of only a single entrance - a ladder through a manhole near Court St. However, that was never an issue for the last 30 years.  Lots of uproar. Lots of surprise. Oh, yes and the NYC government also deep-sixed the one hour National Geographic TV special on the tunnel


We know that The Big Adventure Blog is intended to let you know what you CAN do in NYC, rather than what you can't do, but we wanted to mark the passing (for now) of this fantastic NYC tour. Hope springs eternal as petitions and protests are in the works to get the tunnel reopened.
Get the whole scoop at
http://www.brooklynrail.net/no_more_tunnel_tours.html

Words of Wisdom by The NYC Big Adventure Info@NYCBigAdventure.com at 9:30 AM