Samuel L Jackson & The NYC Subway are not friends

Even famous actors can have brutal subway mishaps. And This fact came up in a brief interview in Time Out NY Magazine last week, but The Big Adventure had doubts so we did some deep digging and fact checking to confirm. 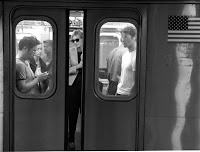 Sure enough, it turns out that a pre-fame Samuel L Jackson was caught in the doors of a NYC Subway train and dragged by his foot roughly 150 feet down the length of the platform twenty years ago. Yikes. The now-ubiquitous movie star suffered a badly injured leg and went on to sue. He ended up with a cool half million in his coffers a couple of years later.
Living in New York and riding the subway every day, it is these kind of stories that are a touch terrifying. However, the best part of this old article from 1996 is that it refers to Jackson as the “Jheri curl-wearing, Bible-quoting hitman" from Pulp Fiction.


Here is the relevant part of the interview that ran in the Feb 2011 article of Time Out NYC:

The movie begins after Black saves White from his attempted suicide on the subway tracks. Have you ever seen anyone fall on the tracks?
I myself was dragged by a subway train. Years ago, in 1990. I was getting off the train, a lady dropped her bag, and I stopped to pick up her stuff. Had one foot on the platform, one foot on the train, and the door shut and the train took off. I got dragged the length of the platform! Luckily I was in the last car, I was a car and a half away from the tunnel before someone pulled the emergency cord.
Were you hurt?
It ripped my ACL to shreds. And I sued the shit out of the MTA! [Laughs]
That's one of the quintessential New York City nightmares.
I was one of 23 people dragged that year. That's a common accident.
Read the Full Article Here
And the full Recent Time Out New York Interview Here

Words of Wisdom by The NYC Big Adventure Info@NYCBigAdventure.com at 9:10 AM