Annoyingly enough, suffering through Subway Fare Hikes in NYC seems to be beccoming an Annual Event

So, as we all know the MTA has delivered another small kick in the crotch with the third fare hike in four years. Just for perspective we wanted to point out that the Unlimited Monthly Metrocard was only $70 in 2005. That's 1/3 of the $104 price that goes into effect December 30th.  But hiding between the headlines of another round of higher prices, was this mostly missed bad news regarding the new fare structure:

"The MTA will no longer sell One-Day Fun passes or 14-day MetroCards, Bonuses on pay-per-ride MetroCards will plummet from 15% to 7% - and will start after riders spend $10, up from $8."

Getting rid of the One-Day Fun Pass? Bad form, MTA, bad form. The One-Day Fun Passes that sell for around $8 is a fantastic option for out-of-town visitors. It allows them to pay one fare early in the day and not sweat riding the rails all the way till 3:00 AM on the same card. For the adventurous and capable, it is the equivalent an unlimited cheap taxi fare throughout the city. An awesome option for groups too. The MTA says that the tourist-friendly MetroCards have become too friendly for subway scammers who buy in bulk and then sell at $2 a swipe at the stations. Which is...well...a lame excuse. 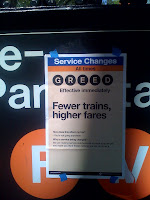 While not the worst news of the fare hike, it just sucks. We get the tough times and we still think the NYC Subway is one of the top transportation options in the country. However, it is looking like suffering through Subway Fare Hikes in NYC and all the perks we’re loosing is starting to become an annual event. (We care less about the 14-day MetroCards disappearing. Apparently less than 2% of riders buy them. Besides, have you ever met anyone who used one?)
Read More: http://www.nydailynews.com/ny_local/2010/10/07/2010-10-07_mta_set_to_approve_subway_bus_and_commuter_train_fare_hikes.html

Words of Wisdom by The NYC Big Adventure Info@NYCBigAdventure.com at 9:04 AM